15 years after the Wadi Ara riots we decided to check what has changed in the relations between the Arab-Israel community and the police. Between over-policing and lack of law enforcement, and between confidence-building measures and the community’s representation among police officers, the Orr commission recomendations are implemented only slowly.

Law Enforcement In The Arab Sector

Three years following the October 2000 events, the Or Commission published its recommendations for the improvement of the relations between the Israeli police and the Arab society.

The commission’s report made recommendartios in three major areas: the treatment of Israeli Arabs as nonhostile, the promotion of dialogue and cooperation between the police and the Arab society and equal enforcement of the law in the Arab sector.

This paper examined the degree to which these recommendations have been implementated in the 15 years since the issuance of the Orr Commission’s report.
With regards to the treatment of Arabs by the police, we found that the Israeli police uses excessive force towards the Arab society compared to the Jewish society. In addition, the Arab sector is, to some extent, subject to over-policing. In recent years, the percentage of arrests that didn’t result in pressing charges among Israeli Arabs was significantly higher than its equivalent in the Jewish sector. These issues have probably accounted for the decline in the level of trust in the police among Israeli Arabs since 2003.

With regards to strengthening the dialogue between the police and the Arab sector, we found that government decisions aimed at expanding the Civil Guard apparatus in the Arab sector have been partially implemented. Moreover, Arab volunteers in the police make up a small part in proportion to their share in the population.
With regards to equal law enforcement in the Arab sector, we found that major Arab cities are still lacking in police stations. This is in part the result of objections by some of the Arab municipalities to allocate lands for the purpose of establishing new police stations. In addition, Arabs’ participation rate in the police force is much lower than their share in the population. Efforts to tackle these problems have been made as part of the implementation of government decision No. 922.

We are proud to help strengthen municipal services! At the occasion of the new civil year, our information center in Zur Baher has started an important cooperation with the Jerusalem municipality. From now on residents will be able to register their children in the school system or appeal local tax or tickets from our offices, without having to go to the city hall. Jerusalem’s new mayor Moshe Leon praised the initiative on his Arabic Facebook page.

We have opened a Facebook page for our Zur Baher project – share and help us inform Arabic speakers! 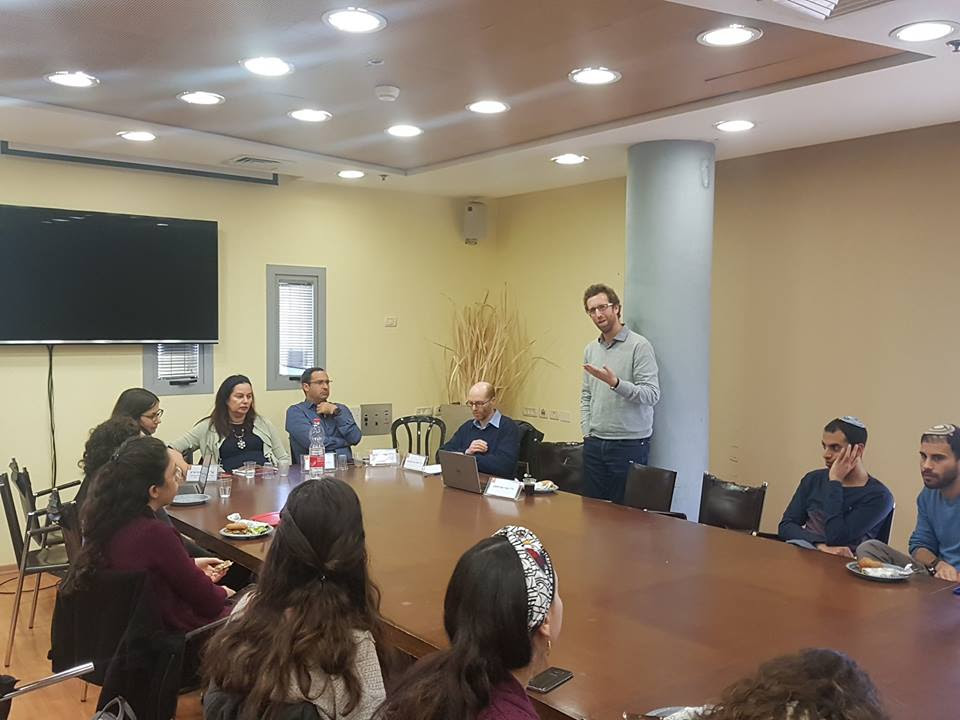 Institute CEO Miri Shalem took part in an important panel on social lobbying for religion and State related issues. The panel took place at the occasion of the 70th anniversary of the Knesset, at Center for Jewish and Democratic Law – Bar Ilan University. Other central participants were head of the Rackman Center for the Advancement of the Status of Woman Adv. Keren Horowitz, and head of the People, Religion and State Center at the Israel Deomocracy Institute Prof. Shouky Fridman. Early January passed away professor Moshe Arens, who played a central role in the founding years of the IZS. Arens, a two-times Defence minister, was also the head of our advising committee and participated to the strategic forum’s discussions.

The Institute in the Media

Tablet magazine published an extensive coverage of Blue&White’s activities at the Qalandia crossing.
The sex-corruption scandal in the justice system was the occasion for The Marker to publish the main conclusions of our comparative research on judges nomination throughout the world.

IZS Chairman Dr. Yoaz Hendel warns liberals: the Palestinian state they call for won’t be Human Rughts friendly whatsoever (Yediot Aharonot).
Founding Chairman of the Institute, Israel Harel analyzes the current elections campaign and the dire straits of some of Israel’s historical parties (Haaretz)
Nave Dromi, the head of Blue&White Human Rights thinks part of the progressive US Jewry is responsible for most of the crisis with Israel.