May 2019 Newsletter: Internationalization of Israeli Law

As the last few weeks have proven, there is never a dull moment in Israel and the Institute for Zionist Strategies is no exception.
Petitions submitted repeatedly by human rights organizations, supposedly in order to protect human rights are in practice actually impinging on the right of Israeli citizens to protection from terror. By focusing world attention on issues of forced feeding of hunger striking security prisoners and the demolition of terrorists’ homes in Israel, these organizations are significantly harming the image of the State of Israel and promoting a Palestinian narrative that portrays the security prisoners and terrorists as freedom fighters.

The aura of an ideological and national struggle which accompanies the security prisoners gains them respect and admiration. The incitement in the Palestinian education system, social networks, and the media create a society that sanctifies terrorists and murderers of Jews and transforms them into role models. The Palestinian Authority supports and embraces the prisoners and their families. Furthermore, the security prisoners benefit from fraternity and an organized supportive community framework in prison with a spokesman and committees responsible for different fields such as: communication with family, contact with wives, liaison with prison authorities etc. Above all, the security prisoners know that they have an excellent chance of being released as part of a future prisoner exchange deal.

In June, the Minister of Internal Security, Gilad Erdan, established a committee to examine the conditions of imprisoned terrorists. In light of the committee’s findings, he decided in January to restrict their conditions to the minimum required by international law. Among his decisions were: to put an end to the separation between Hamas affiliated prisoners and belonging to Fatah, to cancel the position of “prisoner spokesman” in its current form, to restrict the funds deposited in prison for the terrorists by their families, and more.

Despite Erdan’s findings, figures were published last week according to which the security prisoners enjoy holiday meals, receive frequent visits (every six weeks on average), have access to television with a wide selection of channels, games during leisure time, and fitness apparatus. It turns out that security prisoners in Israel benefit not only from a halo of admiration but also from enhanced imprisonment conditions.

Israel’s attempts to diminish the admiration for the terrorists and security prisoners in order to prevent terror, are frequently thwarted or challenged by petitions submitted by human rights organizations. For example, petitions are submitted against forced feeding with the claim that it constitutes a real danger to the terrorist’s health and an infringement of his autonomy over his body; and against requests to demolish the homes of terrorists’ families, with the claim that the state is using people as a deterrent and violating the families’ rights to a home and to live in dignity. These petitions serve as a tool to encourage terror rather than eradicate it.

The large number of petitions submitted is made possible by the assistance of European countries and possesses a distinctly political and worrying nature. The Institute of Zionist Strategies recently initiated a study examining petitions submitted by human rights organizations in cases related to the forced feeding of security prisoners, illegal immigration, and the demolition of terrorists’ homes, all of which significantly harm the State of Israel and its residents.

This study details the manner in which human rights organizations receiving funding from foreign governments promote political objectives through systematic petitioning to Israeli courts. Our study focused on three case studies: forced feeding of prisoners on hunger strikes; illegal immigrants and asylum seekers; and the demolition of terrorists’ homes, and examined the main petitions submitted on these issues by the organizations or on their behalf. The study did not examine private petitions submitted. The study aimed to evaluate the different influences of the many petitions in each of these fields. The main findings are presented below:

With regard to the forced feeding of prisoners, the human rights organizations’ appeals focused international public attention on the policy of the Israeli government attempting to contend with security prisoners, as are detained in different countries, and contributed to the continued excessive and extortive demands from the security prisoners.
Nevertheless, in reality, the High Court of Justice approved the legality of the current arrangement of force feeding and it would appear that most of the damage in this area amounts to harm caused to the State of Israel’s image and in promotion of the Palestinian narrative depicting the prisoners as freedom fighters.
With regard to the Prevention of Infiltration Law and the government’s policy aimed at eradicating the phenomenon of illegal immigration to Israel, the petitions submitted by the human rights organizations have had an extremely inhibitive influence on legislative efforts and on attempts to promote policy measures to curb this phenomenon. Following these petitions, the High Court of Justice revoked the legislation during several rounds of legal proceedings, causing, according to government sources, marked damage to the state’s ability to fight the phenomenon of illegal immigration.
With regard to the issue of demolition of terrorists’ homes, it is apparent that despite the many petitions promoted or aided by the human rights organizations, there has been no fundamental change in government policy and the military commander still maintains a high level of discretion, subject to various reservations determined by the High Court of Justice. Nonetheless, there is no doubt that these petitions delayed demolitions, sometimes for many months, a reality that harmed the effectiveness of this deterrent in the war against terror.

Moreover, it is apparent from the findings that the activity of these organizations significantly influences the public and juridical discourse in Israel – both at local and international levels – surrounding the decision-making process and, all the more so, with regard to the State of Israel’s foreign relations.
Several recommendations were formulated in light of the study. First, effort should be made to increase the transparency of these organizations’ activity, from both ends of the political spectrum (e.g. exposing funding sources of organizations petitioning the court or joining a petition as a “friend of the court – amicus curiae) and reducing the right of standing in law to direct victims only, while limiting the incentive for powerful “return players” such as human rights organizations with large financial resources.
In conclusion, in order to guarantee the continued welcome activity of these organizations in the field of human rights and to bolster their legitimacy in the eyes of Israeli citizens, we advocate acting to increase transparency, further to legislating the Transparency Law and imposing restrictions on the right of standing. 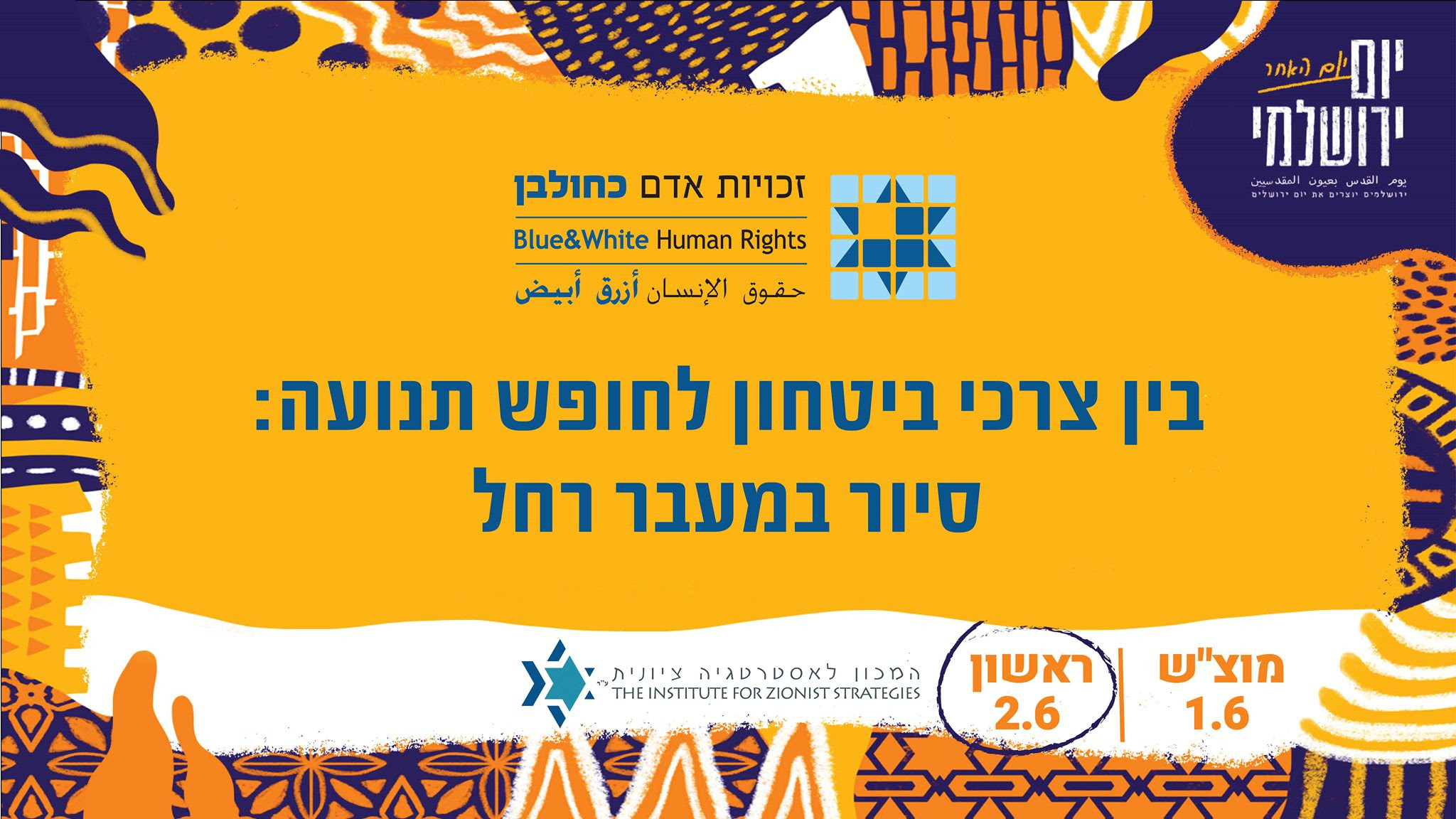 We celebrated Jerusalem Day at the Rachel crossing, in a special tour open to the public.

Jerusalem is the center of life for dozens of thousands of PA residents. The conflict raises several challenges to this reality in terms of economic interests, security and freedom of movement.
In the light of the engoing changes at the crossings around Jerusalem, and in order to both deepen the understanding and challenge some stereotypes, Blue&White activists on the ground all year long presented the meanings of this new reality. 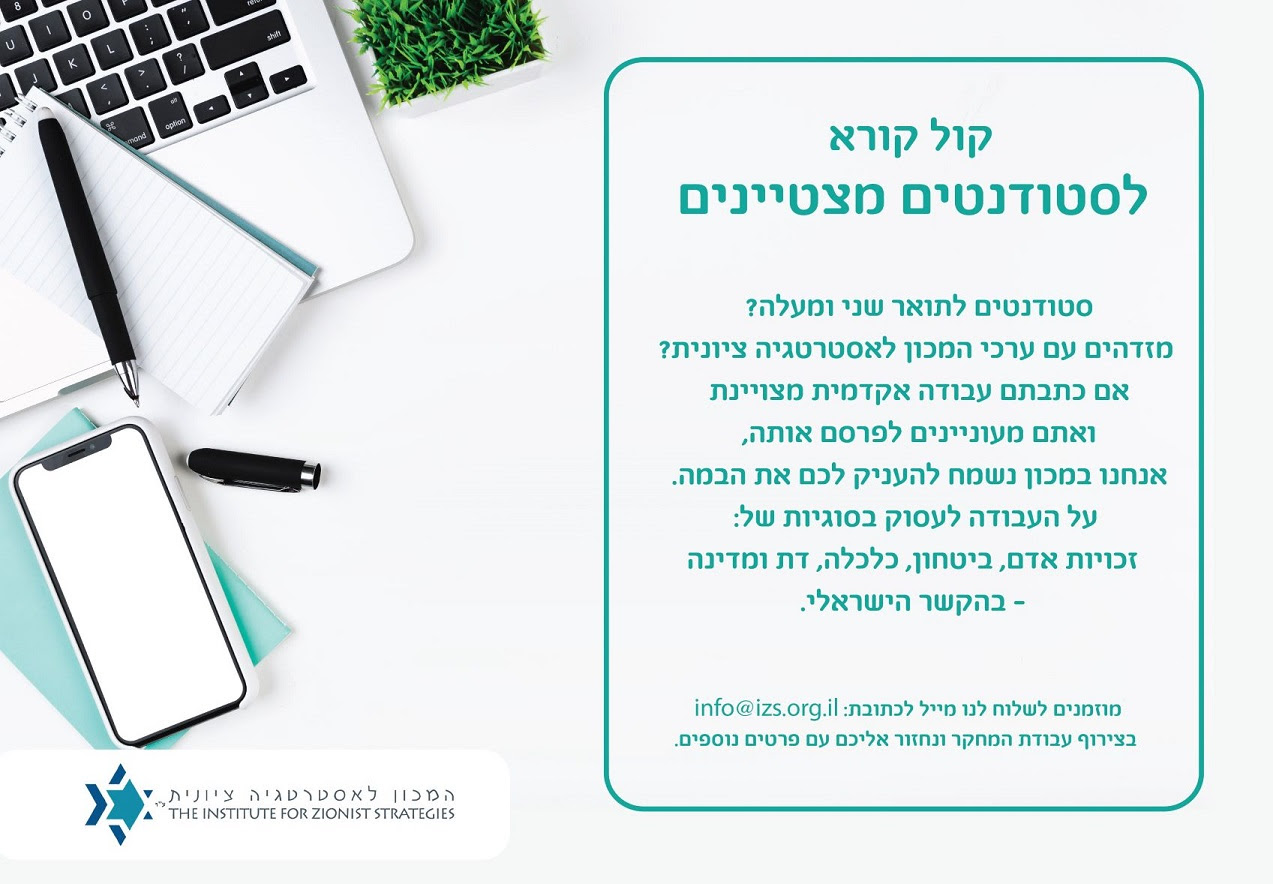 The Institute will again this semester publish an academic paper on a political-social relevant to its activity.

Want to publish the findings of your research? Contact us at: info@izs.org.il

IZS In The Media

* Arutz7 covered our lawsuits abuses research: ”a new research by the Institute for Zionist Strategies shows how ‘human rights’ organizations and European countries interfer with security issues and policy making.”
* Ohad Chemo of Channel 12 News has followed developments at the crossings in the Jerusalem area for years and has unhesitatingly voiced his harsh criticism of the continued crowding prevalent there during the early morning hours. This time however, he too understands that reality has changed dramatically… thanks to right-wing organizations.
* The Protestant news channel GODTV surveyed the Institute’s activity in East Jerusalem, describing it as a “unique initiative” that demonstrates “an understanding that complete Israeli sovereignty over the capital entails investing in all the city’s neighborhoods.”

The following articles were published by members of the Institute and contain references to a wide range of issues on the public agenda:
* Institute CEO, Miri Shalem, criticizes the decidedly comfortable imprisonment conditions enjoyed by the security prisoners (Yediot Aharonot).
* Founding Chairman of the Institute, Yisrael Harel, asks where the new national-religious political faction is headed (Ha’aretz).